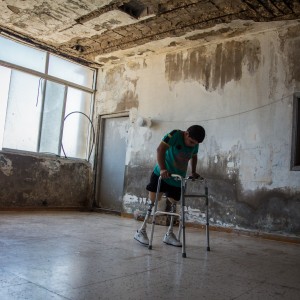 Lebanon / Syrian Refugees / Hussein, 10, practises walking on his new prosthetic limbs at his family’s accommodation in a collective shelter in Tripoli, Lebanon, on June 18, 2014. Hussein was playing with his siblings and cousins in the living room of his home when the bomb hit. All were presumed dead and transported to the hospital morgue; little did they know that the ten year old was still very much alive. The next day as they were preparing the small bodies for burial they found Hussein’s unconscious body shaking from the cold and so they rushed him to treat his wounds which resulted in having both legs amputated above the knee.

All that the Hussein remembers from this ordeal is feeling a sharp stab of pain and then his feet getting numb before waking up in the hospital where he spent two weeks getting the treatment he needed. “When I woke up and saw my legs I felt that my life ended; I told my mother I am finished, my life will never be the same again” says Hussein as he painfully recalls the months that passed after his injury. He still cringes now as he relates the pain he felt every time he tried to move or when the doctor used to come to clean his wounds.

Hussein, his mother and his remaining siblings came to Lebanon fleeing Homs around three months ago and they have been living in the outskirts of Tripoli near the beach. “My dream is to run again” says Hussein and today, with the help of the World Rehabilitation Fund, he is one step closer to his dream; he has just begun to learn how to walk in his new prosthetic limbs and his whole life changed once more. “We have been living next to the beach and I can see it from the small window in our building; I have been wanting to go with the other kids but no one can carry me” explains Hussein “now, I can go on my own” adds the ten year old with an unmistakable smile on his face, something his mother has not seen on his face since the day of the incident. UNHCR / A. McConnell / June 2014