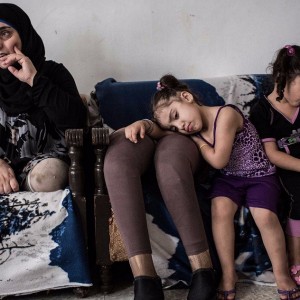 Hasna, pictured with her nieces, Aseel and Hadeel, 4, in their shared home in Tripoli, on June 11, 2014. In March 2012, Hasna, her husband and her two children were traveling on a motorcycle in Qusayr when a bomb fell nearby: “My daughter was sleeping in my arms, she never woke up,” recalls Hasna of the day she lost her legs, husband and two children all at once. Her husband was still alive as they were being transported to a field hospital: “My husband was holding my hand the entire time, up until we were driven to the town of Lousseh. It was there they informed me that my husband had breathed his last breath.” That same night Hasna reached a hospital in Lebanon at around 4:00 am and lost consciousness . She had seen her legs and suspected they were lost. After four surgeries, both legs were lost and Handicap International, an NGO working in the region, supplied her with prosthetics: “It was hard and difficult but now I always try to focus on the positive things. I don’t want to be sad and angry, I don’t want the negative feelings to take control of me.” UNHCR / A. McConnell / June 2014